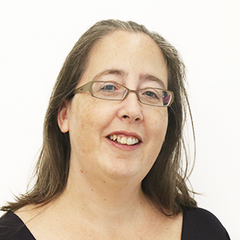 Professor Patricia Justino is a development economist who works at the interface between Development Economics and Political Science. She is a leading expert on political violence and development, and the co-founder and co-director of the Households in Conflict Network. She is currently Deputy Director at UNU-WIDER and Professorial Fellow at the Institute of Development Studies (IDS) in Brighton, UK (on leave).

Professor Justino’s research focuses on the relationship between political violence, institutional transformation, governance and development outcomes. She has led major research programmes funded by the European Commission, the UK Economic and Social Research Council (ESRC) and the UK Department for International Development (DFID). She is currently the director of a ESRC large grant project on the relationship between inequality, social trust and governance outcomes.

Professor Justino’s research has been published in leading international journals such as the Journal of Development Economics, Journal of Conflict Resolution, the Journal of Peace Research, and the World Bank Economic Review, and is the lead author of A Micro-Level Perspective on the Dynamics of Conflict, Violence and Development (Oxford University Press). She has held several advisory positions in major international organizations, including Action Aid, DFID, FAO, UNDP, UNESCO, UNICEF, UN Women, USAID, and the World Bank. She was the director of the MICROCON research programme and deputy director of the TAMNEAC Initial Training Network.

What would be the economic consequences of a military stalemate in Ukraine?
by Patricia Justino, Kit Rickard
October 2022

Russia’s war in Ukraine may reach a stalemate as neither side appears in reach of a military victory. Unless a settlement can be agreed, a frozen conflict may emerge, which will delay economic recovery in Ukraine...

An exploration of the association between fuel subsidies and fuel riots

Between 2005 and 2018, 41 countries had at least one riot directly associated with popular demand for fuel. We make use of a new international dataset on fuel riots to explore the effects of fuel prices and price regimes on fuel riots...

The social consequences of organized crime in Italy

Organized crime affects security, development, and democracy worldwide, but not much is known about its social consequences...

Kalle Hirvonen , Research Fellow at UNU-WIDER, was interviewed by YLE for a news article published on 10 March 2022 on the effects of the Ukraine war on global food security. ‘The war in Ukraine is causing a major supply shock to the world...

Next week a high-level conference on peacebuilding and conflict brings more than 250 experts to Helsinki to discuss new research and current policy challenges in preventing and resolving conflicts and sustaining peace across the world. The two-day...

To date, there is limited understanding about the consequences of wartime dynamics for post-war state-building processes...

The war in Ukraine: Civilian vulnerability, resilience, and resistance

The current and future civilian impacts of the war in Ukraine are immense...

The conflict in Ukraine - the role of civilians

While there is much to discuss about the geopolitics of the Russian invasion of Ukraine, let's not forget the men, women and children of Ukraine who now face utter devastation to their lives – they matter...

Revisiting the links between economic inequality and political violence: The role of social mobilization

The main aim of this paper is to explore theoretically important mechanisms through which economic inequalities may affect the emergence of political violence given the forms of social mobilization they (may) generate...

This paper investigates how armed groups affect the organization of local communities during armed conflict in Colombia...

WWII and the legacies of fascism in Europe

As part of the UNU-WIDER project Institutional legacies of violent conflict , project contributors under Theme A1: WWII and the legacies of fascism in Europe come together on 4 November 2021 at 3pm to present and discuss their research papers in...

Households in Conflict Network (HiCN) organises their 17th Annual workshop on 11-12 October 2021 under the theme “Conflict, Migration, and Displacement“. UNU-WIDER's Senior Research Fellow Patricia Justino is the co-founder and co-...