To meet development objectives, aid recipients and their donor partners need to effectively manage the macroeconomic effects of aid. Aid can improve the economy's supply-side and raise growth. But if the macroeconomic impact of aid is not managed well it can distort and sometimes undermine growth. In December 2011, AERC and UNU-WIDER held a conference under the ReCom programme on the ‘Macroeconomic Management of Aid’, which aimed to clarify aid's macroeconomic effects. This knowledge will contribute to improving aid's growth impact and help with the scaling up of aid itself.

Aid has potentially large effects on the structure of the recipient’s economy and international competitiveness. These in turn greatly influence aid’s effectiveness in achieving economic growth, employment creation, and poverty reduction. At the same time, the bigger macroeconomic picture for many aid-recipient countries is changing, the result of better export earnings, resource revenues, and more inward investment. Some are becoming less aid-dependent, and resource revenues now constitute a much bigger source of foreign exchange than foreign aid in some countries. All of these inflows need careful macroeconomic management to maximize their development effectiveness.

The purpose of the recent ReCom conference, held in Nairobi by the African Economic Research Consortium (AERC) and UNU-WIDER, was to focus not just on the macroeconomics of aid but on the bigger macroeconomic picture, particularly in Africa. It aimed to move the debate beyond generalities, to take a good look at country experiences, and to sharpen our tools and techniques. On this basis, macroeconomics can contribute to finding out what works in foreign aid; what could work; what is transferrable across countries, especially to the poorer and smaller countries that remain aid-dependent, and how the macroeconomics of scaling up aid can be managed. In this way, the conference contributed to the overall aims of ReCom.

The macroeconomics of aid

We now know more about the macroeconomics of aid and its effectiveness—the result of nearly three decades of research, and especially technical assistance, to build the capacity of macroeconomic policy in Africa and other recipient countries. However, there still remain many unanswered issues. Macroeconomic debates, particularly concerning aid and growth, tend to revolve around extreme positions which are not based on rigorous research. In particular, negative macroeconomic effects (so-called ‘Dutch Disease’) that are often ascribed to aid are frequently not well thought out. This does not imply that aid has worked at all times in all countries, and to make aid work better we need to know more about its macroeconomic effects.

Evidence based on empirical research shows that aid has a positive and significant impact on economic growth, at both the macro and meso levels. Research is now starting to unpack the channels through which aid impacts on growth at the country level. Context is crucial and it is important to ask whether aid is being managed properly in the context of development plans of individual countries? A key message from the conference was that country studies should get the attention which they require and need.

Aid flows are part of a country’s financing mix, underpinning a public spending programme in an institutional context. That financing mix is a blend of concessional and non-concessional finance, public and private, and on average most countries are now less reliant on ODA, although some ‘fragile states’ remain aid dependent. Public spending has grown, the result of larger inflows of aid and other finance, as well as some success in mobilizing more tax revenue. The institutional context—which includes the capacity and ability of the finance ministry and the central bank to put an effective macroeconomic framework around aid and other capital flows—has improved.

Debates about the macroeconomic effects of aid are taking place in a rapidly changing macroeconomic context. In many economies—including Ghana and Ethiopia, as well as some post-conflict countries such as Mozambique—there has been a strong resumption of economic growth. That economic growth has raised the revenue base of governments and together with tax reform this has helped improve public finances. Growth is moreover a product of, and a cause of, a change in the development finance blend. While aid previously was dominant, foreign direct investment (FDI) and natural resource flows (as in Uganda, Ghana, and Kenya) are now substantial in many country contexts and have to be managed alongside aid.

Two countries highlight the issues. In Uganda oil will add at least 30% to government revenue over the next few years according to the World Bank. The volume of aid, then, is now frequently lower as a percentage of GDP than 20 years ago. Aid flows to Uganda, for instance, peaked at 19% of GDP in 1992, before gradually declining to around 5% of GDP by the end of 2010. Meanwhile, Ghana has achieved sustained growth since the first aid-backed reforms of the early 1980s. Ghana is now a lower-middle-income country and associated with this is the likelihood of future declines in aid (at least as a share of GDP). As a result, the tasks for macroeconomic management in Ghana and Uganda are changing.

So far, while it is believed that different sources of inflow have different effects, there is little evidence, or theory, about how different types of capital inflow may result in different macroeconomic outcomes, particularly in terms of the real exchange rate. The effects of aid need to be disentangled from those of private capital and resource flows. Methodological approaches for this were the subject of many conference papers. A key policy question here is whether we should treat aid and resource flows as part of same problem for monetary, fiscal policy, and aid management.

How can donors help?

As aid dependence falls and natural resource flows rise, donors should sequence their aid flows carefully so as to offset the revenue volatility that frequently arises from commodity price fluctuations. Donor programmes are quite rigid, so disbursements are often not best timed to achieve this. To date donors have not been as successful at sequencing their aid as they could be, though research from Uganda demonstrates how providing aid in a countercyclical fashion can compensate for revenue shortfalls, avoid domestic indebtedness and help smooth public spending, so increasing aid effectiveness. Remittances meanwhile, are often countercyclical and can benefit households directly.

A major aspect in aid’s relationship with other capital sources is if, and how, aid can leverage FDI. Currently, FDI is concentrated in a small number of sub-Saharan African countries, being attracted to extractive industries. In Ghana, as in other countries, the challenge is for aid to leverage efficiency-seeking FDI which can help the country achieve transformative structural change. Certainly, in order to reach middle-income status, many countries still need to experience structural change and here FDI is essential. Through mitigating risk (particularly expropriation risk) and investing in infrastructure, aid can attract FDI. It is important to study further the interaction between these two capital flows. 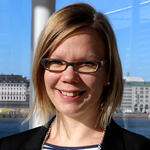 Reflections on Transition
Next