Short biographies of those who contributed to the event. 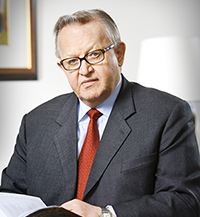 Mr Ahtisaari’s activities post-presidency have included facilitating the peace process between the Government of Indonesia and the Free Aceh Movement, chairing an independent panel on the security and safety of UN personnel in Iraq, appointments as the UN Special Envoy for the Horn of Africa and Personal Envoy of the OSCE CiO for Central Asia, and Special Envoy of the Secretary-General of the United Nations for the future status process for Kosovo.

President Ahtisaari is active in numerous non-governmental and non-profit organisations. In December 2008, Mr Ahtisaari was awarded the Nobel Peace Prize.

Professor Kanbur's main areas of interest are public economics and development economics. He is particularly interested in bridging the worlds of rigorous analysis and practical policy making. His publications cover topics such as risk taking, inequality, poverty, structural adjustment, debt, and agriculture.

Elsie S. Kanza is the Director, Head of Africa at the World Economic Forum, the Geneva, Switzerland-based organization whose mission is to engage political, business and social leaders to shape global agendas and effect local change.

Prior to her role as Head of Africa at the World Economic Forum, Kanza served as Personal Assistant and Economic Advisor to His Excellency, Jakaya Mrisho Kikwete, President of the United Republic of Tanzania from 2006 to 2011. Ms Kanza began her career with the Ministry of Finance and Central Bank of Tanzania where she worked in various capacities. Named one of Forbes’s 20 Youngest Power Women In Africa in 2011, Ms Kanza is a World Economic Forum Young Global Leader for 2011 and an Archbishop Desmond Tutu Leadership Fellow for 2008.

Martin Ravallion holds the Edmond D. Villani Chair of Economics at Georgetown University. Prior to joining Georgetown in December 2012 he was Director of the World Bank’s research department, the Development Research Group.

Professor Ravallion’s main research interests over the last 25 years have concerned poverty and policies for fighting it. He has advised numerous governments and international agencies on this topic, and he has written extensively on this and other subjects in economics, including three books and numerous papers in scholarly journals and edited volumes. Amongst various prizes and awards, in 2012 he was awarded the John Kenneth Galbraith Prize from the American Agricultural and Applied Economics Association.

Finn Tarp is Director of UNU-WIDER, Helsinki, Finland. He is also a professor of development economics at the Department of Economics at the University of Copenhagen. He founded the Development Economics Research Group (DERG) in 1996, and since then has co-ordinated DERG’s extensive academic research and teaching activities alongside a large portfolio of externally funded development economics research and capacity-building projects. Professor Tarp has recently been appointed member of the Council of Eminent Persons (CEP) advising the Chief Economist of the World Bank.