Blog
Why should I care about economic growth?

Director of UNU-WIDER, Professor Kunal Sen is a world leading expert in development economics and led on ESID’s research into economic growth. In this blog he outlines some of our main findings and positions on the value and drivers of economic growth, based on nearly a decade of research.

You hear a lot about the importance of economic growth, but only recently have people begun to question if growth leads to the sort of lives that people really value. For The Effective States and Inclusive Development (ESID) Research Centre, economic growth is important as a means to fuel progress in social terms – including increasing well-being and equity – rather than increasing economic output as an objective in itself.

As to how and why growth happens, there isn’t a unified response from academics, nor on why some countries achieve inclusive growth – with benefits shared across society – versus benefits concentrated among the elite.

ESID’s view is that inclusive growth is just as much about politics as it is about economics. Understanding how and why economic booms and busts happen in a country is critical to understanding how a country develops and how the benefits of that growth are distributed.

Economic policy is important, of course, but it’s crucial to give the role of politics it’s due. It’s difficult to understand the trajectory of growth in a country without understanding its political settlement. This blog outlines some of our main findings and positions on the value and drivers of economic growth, based on ten years of research. 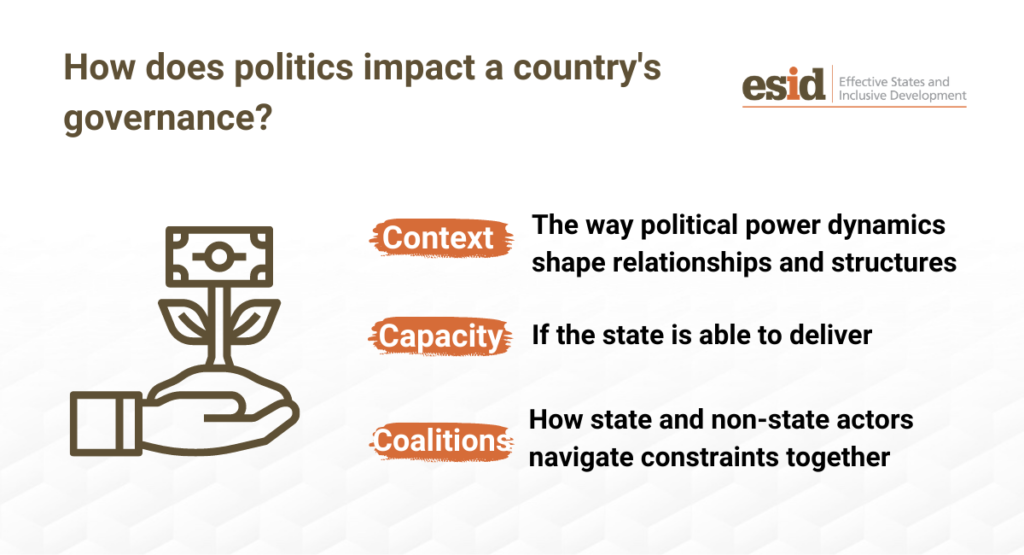 When economies grow, states can tax that revenue and gain the capacity and resources needed to provide the public goods and services that their citizens need, like healthcare, education, social protection and basic public services.

Further to benefits provided by the state, inclusive growth brings wider material gains. Growth creates wealth, some of which goes directly into the pockets of employers and workers, improving their wellbeing. As people earn higher incomes and spend more money, this enables people to exit poverty and gain improved living standards.

While we argue that economic growth should be a means rather than an end to development, we don’t want it to sound like we don’t support it. Looking globally, you find that most countries that have shown success in reducing poverty and increasing access to public goods have based that progress on strong economic growth.

Politics is a key driver of economic growth

University curricula might have you thinking otherwise, but when thinking about growth, economics and politics cannot be separated. ESID’s political settlement framework allows us to look at growth and governance in an integrated way.

The nature of a country’s political settlement shapes how growth happens and how the flow of benefits from growth are directed – this is the core to ESID’s perspective. It questions; Do these benefits flow to elite groups or certain segments of society, or are they more widely distributed? Do the beneficiaries change with the political tide, or do they stay consistent?

Without thinking about a country’s political settlement, it’s hard to understand how growth will start and be maintained. Malaysia and Thailand present two examples from our research. These were two of the fastest growing countries from the 1970s to the 1990s, until the East Asia financial crisis caused that to pause. Thinking from a purely economic perspective, it could have been expected that strong growth would have returned after the shock. In fact, it didn’t because of the local political settlement, which prevented a wider group of actors from participating in the activities required for growth.

It’s clear from this example that growth can occur, but if the political settlement doesn’t evolve to allow for more open, participatory economic activity, then growth will not be sustained. If you ask an economist why growth stalls, they will say it’s to do with economic policy mistakes, but at ESID we argue that shortcomings in economic policies are compounded by the political settlement. Economics alone cannot provide all the answers. 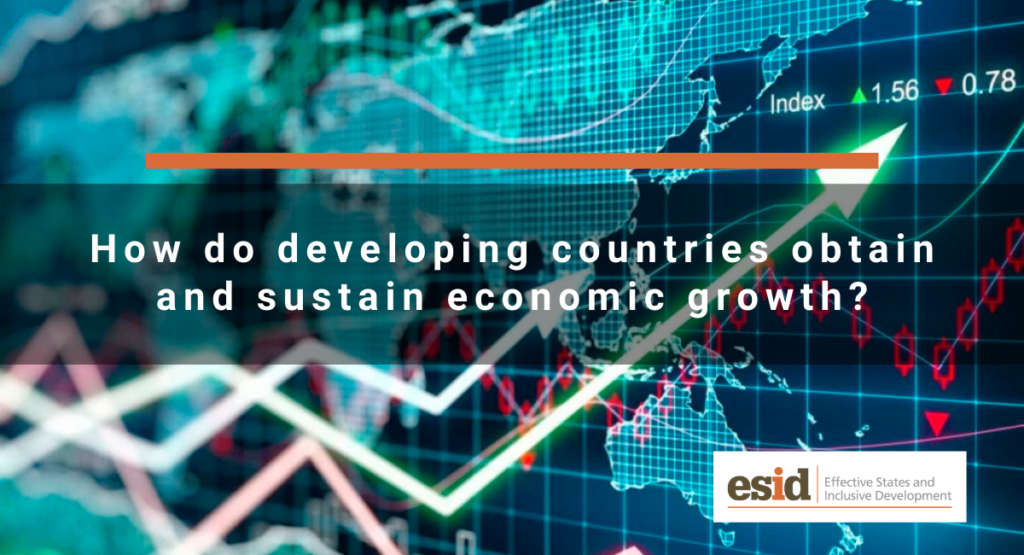 Deals are as important as rules

Deals are what people actually agree on – the rules of the game – rather than the formal institutions, which may be ignored or corrupted. That deals can be relied on is crucial for investors to feel confident in making investments, without which economic progress will be slower and fragmented. In terms of the state’s role in economic development, effective states are those ones that are best able to offer ordered deals: commercial agreements where both parties can trust that the deal will proceed as agreed.

A crucial question to consider is whether everyone makes a deal around an investment opportunity or a government contract, or is it only those who are connected to the government? Different types of development require different sorts of deals. You can get rapid growth without strong institutions so long as deals are ordered and trusted.

As important as ordered deals are open, inclusive deals. These are deals that are accessible to a wide group, so lots of investors and enterprises can participate in development. In this way, deals must evolve from closed to open, with a wider group of investors able to participate, as opposed to just the friends and cronies of politicians. This is when we see structural transformation and sustained inclusive growth.

A collusive deals space, with small groups of capitalists making deals with those in power, can lead to rapid economic take off. However, in places where rapid growth has come from close relationships between politicians and capitalists, problems can come down the line in converting growth to structural transformation.

Economic growth can catalyse seismic social shifts by generating new economic opportunities and possibilities, new ways of thinking and new technologies. Growth can encourage the evolution of new forms of institutions and new social relations, too, as society adapts to the new material status quo.

We see this structural transformation occur more frequently when deals are open and the benefits of growth are widely distributed. Transformation requires the interaction of different capitalists with new technical abilities to exploit new areas and put labour to work on new things. Closed deals are likely to block that transformative process.

Structural transformation is important because it can make the gains of growth more sustainable. This is because the productivity of capital increases with greater investment in technology and human capital. Economies move to produce higher value goods and services rather than focusing on backbreaking low value activities.

This is how historically countries have been able to move forwards and overcome poverty in a sustained way over time. Transformation shifts countries onto a different trajectory of productivity, with more and better jobs that create more value. We also see companies become more self-sufficient from a commercial point of view rather than needing to rely on direct support from the state.

What next for the growth agenda?

Today more than ever, every discussion around economic growth comes with a big caveat around sustainability and the need for targeted expansion in low polluting, green sectors. This may actually mean de-growth in some sectors, for example with the decrease in fossil fuels as more environmental options are favoured. Should potential producers, sitting on untapped or mined reserves, even start to exploit those assets? Or is it recommended that they look to get ahead of the curve with post-fossil fuel energy transition? These are some of the big questions that will shape discussions around economic development for years to come.

Watch a summary from Kunal:

This article was first published by ESID on 12 January 2021. It is republished here with permissions.

This article was first published by The Effective States and Inclusive Development (ESID) Research Centre on 12 January 2021. It is republished here with permissions.

Blog | The global distribution of routine and non-routine work – and why we should we care about it
Blog | Late development, early adoption – how new technology is reshaping the future of structural change
Blog | Promoting industrialization in Africa
Blog | Have you heard about the GGDC/UNU-WIDER Economic Transformation Database?
Blog | Sub-Saharan Africa had a manufacturing renaissance in 2010s – it’s a promising sign for the years ahead
Blog | Ghana's lockdown hit vulnerable workers hard

Coronavirus: five ways some states have used the pandemic to curtail human rights and democracy

Coronavirus: five ways some states have used the pandemic to curtail human rights and democracy
Next