Helsinki: symbol of peace in Aceh

On the 15 August 2005, a government banquet hall in Helsinki became the centre point for international media. It was a day when the peace settlement between the Indonesian government and Aceh Independence Movement (Gereka Aceh Merdeka, GAM) known as the Helsinki Memorandum of Understanding (MoU) was signed in order to end thirty years of armed conflict in the most western province of Indonesia on the island of Sumatra.

The settlement and the negotiation process leading to it was facilitated by Martti Ahtisaari, former President of Finland, and his office, the Crisis Management Institute (CMI). The settlement was signed just eight months after the Indian Ocean earthquake and tsunami in December 2004 that had devastating impacts on Aceh. It is estimated that 120,000 people died and over 700,000 were displaced. Oxfam International estimated that the majority of those killed were women, and that male survivors outnumbered women by the ratio of 3:1.

The Aceh peace negotiation has gained international recognition. It is used as an example of a successful third-party mediation and a flagship peace process to promote Finnish peace mediation skills internationally. Measured with certain parameters, the Helsinki Peace Process can be considered as successful: the number of hostilities has dropped, former ex-combatants are demobilized and disarmed according to the agreement, Aceh has held a number of successful elections, and former combatants have transformed into politicians, bureaucrats and businessmen. However its success when looked at from a post-tsunami gender perspective can be questioned.*

What was clear from the outset of humanitarian response to Aceh was that it was artificially divided into post-tsunami and post-conflict reconstruction contexts, primarily enforced by the Indonesian government, but actively followed by the international humanitarian response through separate victim categories, programming and budgeting. The generous tsunami reconstruction funding is in stark contrast to the few efforts aimed at repairing houses, restoring livelihoods and infrastructure in areas affected by the armed conflict. 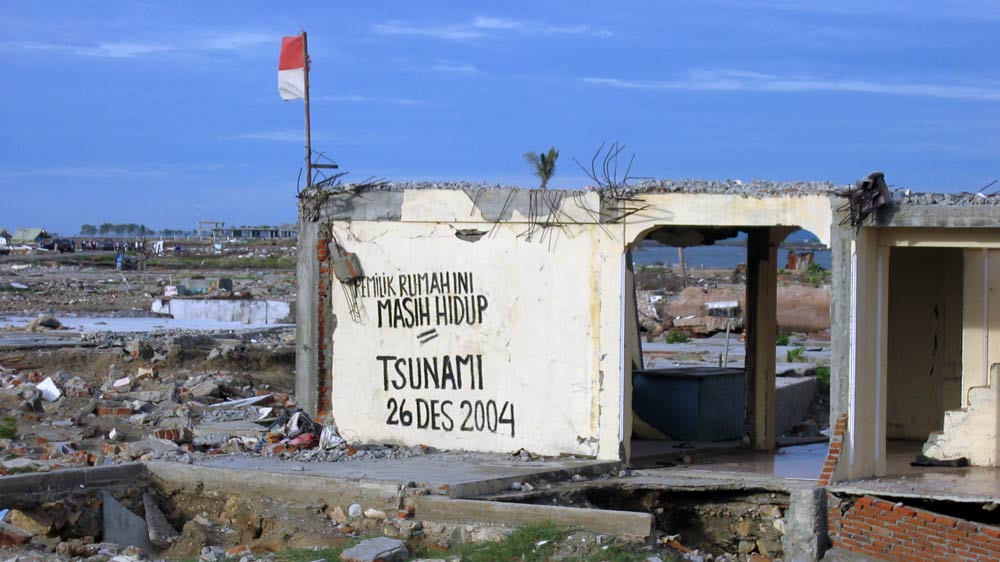 This despite the fact that surveys of tsunami-affected coastal Aceh had demonstrated that it was impossible to separate tsunami victims from conflict victims as many of the tsunami-affected areas were also areas of high conflict. For example, assessments made in 2007 and 2008 by Liga Inong Acheh (a non-governmental organization formed to support former female ex-combatants) illustrate how the conflict dynamics in the pre-tsunami context created complex situations for the post-tsunami programmes. For instance, conflict-affected communities from the hinterland areas in Aceh Besar and Aceh Jaya had settled in the coastal areas, which were then destroyed by the tsunami. The settlers included transmigrants who had left their villages after being caught up in the conflict. Almost all the women reported having been beaten, and some were forced to take refuge in the coastal areas after their houses were burnt. These people were already suffering the consequence of the armed conflict before the tsunami occurring in December 2004.

From a gender perspective the success of the peace process in the context of the tsunami can be questioned. Acehnese women activists invited to take part in the global review process of the UN Security Council Resolution 1325 reviewed the peace process less optimistically — women’s needs and concerns have been marginalized. Unintended gendered impacts of both the conflict and the peace process have a number of negative impacts on the day-to-day lives of the Acehnese. For example, international humanitarian aid in the aftermath of the Indian Ocean tsunami in 2004 and the Helsinki Peace Process in 2005 has fuelled severe new forms of political struggle that use the rhetoric of respectability and Acehnese identity – utilizing the special autonomy status granted to Aceh in the peace process to challenging Indonesian constitution, legal, and political systems.

One of the most severe examples of this is the criminal law (qanun jinayat) that was passed by the Acehnese provincial parliament in 2014. This meant that reporting on rape could lead to new prosecution on non-martial affair/adultery and certain same-sex acts between consenting parties were criminalized. The law came into  effect in September 2015 and the appeal to the Supreme Court of Indonesia by civil society organisations did not challenge the law as unconstitutional.

Different forms of gendered violence continue to be normalized in post-conflict and post-tsunami Aceh. In post-conflict context, these violent acts have been targeted at various religious, ethnic and gender and sexual minorities, but also increasingly towards female human rights defenders, and even women’s and gender studies lecturers. Labelling women activists as agents of the West has further created divides between women’s groups and hindered grassroots solidarity work.

Women are not passive victims

Yet, far from being passive victims or being driven by any outside forces, Acehnese women’s organizations and Islamic feminist scholars have fought for decades for their right to be included in the legal debates, setting political agenda and providing holistic perspectives to tackle multiple forms of insecurity: physical, political, economic, and also environmental security vis-à-vis natural hazards and climate change.

Political and economic development in Aceh after the Helsinki Peace Process has not reduced the rampant poverty. Aceh is one of the most corrupt provinces of Indonesia, and many former ex-combatants, including the female Inong Balee combatants and conflict-affected civilians still await the materialization of many promises made in Helsinki in 2005.

*In 2015, two Acehnese women, Eka Srimulyani from the Islamic University Ar-Raniry in Banda Aceh, and Donna Swita, Head of Office, Solidaritas Perempuan (Women’s Solidarity), joined me for an interview at Smolna Yellow Hall, the site of the MoU signing ten years earlier. Our aim was to reflect upon the first decade of peace from the point of view of women’s rights and gender equality and review the peace process. This interview, which has been published as a 17-minute video, MoU Helsinki – Reclaming back history (link: https://www.youtube.com/watch?v=j5I6QbjockA) is part of my research project Scraps of Hope (http://scrapsofhope.fi/aceh/) that studies the first decade of peace from the perspective of equality and justice.

Marjaana Jauhola is a Docent in Development Studies and Academy of Finland Fellow in Gender Studies at the University of Helsinki. Scraps of Hope is a research project (2012-16) where urban ethnography of peace in the city of Banda Aceh have resulted in academic publications and mini documentaries that focus on non-elites who are less heard in the peace process. The ethnographic encounters are seen as an active dialogue on the ‘bottle necks’ of the peace process, breaking the boundaries between research, documentarism and activism in order to raise awareness of contemporary and complex issues, such as sustaining peace. Her PhD research on politics of gender in post-tsunami reconstruction efforts is published by Routledge (https://www.routledge.com/Post-Tsunami-Reconstruction-in-Indonesia-Negotiating-Normativity-through/Jauhola/p/book/9780415527590).

The views expressed in this paper are those of the author(s), and do not necessarily reflect the views of the Institute or the United Nations University, nor the programme/project donors. Responding to crises: From relief and resilience to resolution

Rising powers and the collapse of the Doha Round

How did South Sudan get stuck in a fragility trap?

Conference on responding to crises

Blog | Five things I learned from the 'Responding to crises' conference
Blog | Responding to crises: From relief and resilience to resolution
Blog | Rising powers and the collapse of the Doha Round
Blog | Why migrants need to be factored into responses to unexpected crises
Blog | Common factors in conflict-induced state fragility
Blog | How did South Sudan get stuck in a fragility trap?

Does women’s education reduce rates of death in childbirth?

Does women’s education reduce rates of death in childbirth?
Next

The labour market implications of COVID-19 for Bangladeshi women

With the first confirmed case of COVID-19 in Bangladesh on 8 March 2020 and the initiation of a lockdown on 26 March 2020, 1 the livelihoods of a significant number of people were under serious threat — with women most likely to suffer the wors...
The labour market implications of COVID-19 for Bangladeshi women