Tanzania is, together with Kenya and Uganda, one of the founding members states of the East African Community (EAC), a regional intergovernmental organization which nowadays consists of six partner states in the region. Since the revival of the new EAC in 2000, EAC Customs Union (EAC-CU) in 2005, and EAC Single Customs Territory (EAC-SCT) in 2014, there have been concerns about the beneficial effects of the community on Tanzania’s trade performance, the economy and people’s wellbeing. What has been the impact of the integration process and what challenges remain?

Kenya has continued to be the main trading partner for Tanzania in the EAC markets; imports from Kenya have dropped significantly

Tanzania’s exports to the EAC region are largely agricultural products, signaling lack of substantial structural change in the region

Challenges persisting under the EAC include lack of harmonization of customs and electronic cargo clearing systems, agreements awaiting ratification, and delayed submission of instruments of acceptances

Has the East Africa Custom Union worked for Tanzania?

The results of an analysis using structural gravity model show that the EAC and EAC Custom Union (EAC-CU have significantly enhanced Tanzanian trade into EAC markets. The effects are much higher for the exports than for imports. While exports into EAC markets more than doubled over 1997–2017, imports dropped by more than 50%. EAC markets, however, still constitute only a small share of Tanzania’s total trade as they account on average only about 10% of all of its exports and 5% of all of its imports.

From 2015 onwards, the trade deficit balance with Kenya changed into a trade surplus balance, signaling improved trade balance. At the same time Tanzania has maintained a significant trade balance surplus with the rest of other EAC partner states.

Figure 1: Tanzania’s total exports and imports share (%) to EAC, Africa, and rest of the world

Impact of the EAC single customs territory on Tanzania’s exports

The EAC countries agreed to implement a Single Customs Territory (SCT) in 2013. The SCT was aimed at facilitating movement of goods across borders. Trade costs and time have significantly reduced with the implementation of SCT. However, the envisaged benefits of more straightforward flow of goods have materialized slowly over the period 2004–18. Why is this?

The analysis reveals that the volume of Tanzania’s merchandise exports has not grown significantly under the SCT, and the export items are largely agricultural. The exports in manufactures and chemicals have remained low in terms of value, with large shares going to Rwanda, Burundi, and Uganda. This has not changed over time despite the good performance of EAC economies. 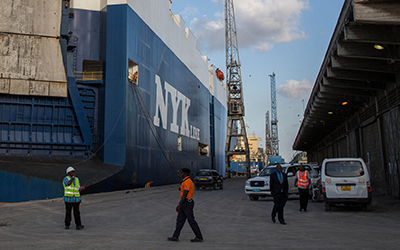 Challenges persist under the EAC-SCT such as the harmonization of the customs systems and the electronic cargo clearing system, agreements awaiting ratification, and submission of instruments of acceptances for trade agreements.

Policy opportunities to facilitate the growth of Tanzanian exports include further expediting harmonization of the customs systems and electronic cargo tracking. Streamlining border procedures would help reduce costs, boost export volumes and revenues, cognizant that other factors such as lowering tariffs and improving value chains would increase revenues quicker. This may call for investment in supportive information technology infrastructure, legislation and institutions that would ease the movement of goods across borders.

There is also need for strengthening institutions that implement trade policies, increasing ‘value added’ of exports and product diversification, and expediting ratification of relevant protocols, for instance sanitary and phytosanitary protocol and avoidance of double tax agreement.

Finally, efforts towards successful implementation of SCT will only be achieved through member states investing in human capital and resources to revamp infrastructure, customs administration, and logistics.

Upgrading the quality of export manufacturing, through enhanced technical content and integration into GVCs are important drivers of productivity growth and job creation. Tanzania’s manufactured exports have declined from 31% in 2008 to 25% in 2016 and 2017. In addition, medium- and high-technology exports constitute only a small share of manufactured exports averaging 15.1% between 1997–2015.

The results of a descriptive and econometric analysis show that Tanzania has made strides in diversifying the number of export products during the period 1997–2018. The shares of low- and medium-technology manufactures have increased over time. Nevertheless, technology-intensive manufactures remain at a very low level, and the number of export destinations has decreased.

Tanzania has integrated into GVCs although this remains limited. The African Growth and Opportunities Act (AGOA) of the US, providing duty-free access, and buyer supplier linkages with China have contributed to the growth in textiles. However, the number of Preferential Trade Agreements (PTAs) that affect the decision of a firm to offshore or outsource to a developing country, remain limited to regional blocs.

To improve the Tanzanian export performance within the EAC there is a need to strengthen institutions that implement trade policies, diversify the products, make investments on modernizing customs procedures, and expedite ratification of relevant protocols

There is a need for deep Preferential Trade Agreements with diverse regions to attract investment, in particular from the Africa Continental Free Trade Area (AfCFTA)

In order to increase the competitiveness of Tanzania’s manufactured exports, policies should focus on supporting the technology intensity of manufactures especially in the medium-technology category; entrenching existing GVCs in the textiles and apparels sectors; negotiating deep PTAs with diverse regions to attract investment in GVC sectors; and on infrastructural improvements.