Presumptive tax, a final tax on business income, was introduced in Uganda in 1997. It has been reformed several times since its conception. The latest reform in July 2020 sought to make the presumptive regime more progressive, simpler and fairer to small firms. The revised rates have however raised new worries about lower revenues and complexity, including a lack of clarity as to what constitutes acceptable record keeping.

Many countries in Africa have designed simplified tax regimes for small businesses, including presumptive tax, a form of income tax charged on turnover

In Uganda, the most recent presumptive tax reform in July 2020 sought to address past challenges of complexity, regressivity and high tax rates

While the new reform simplifies the presumptive tax regime, it also suffers from challenges with enforcement and has low revenue potential

Alternative reforms presented in this brief, including a low-rate flat tax system, offer ways to simplify the presumptive regime further, with potential to support long-run compliance and revenue generation

This policy brief provides an assessment of the reform’s impact on presumptive tax revenue. The brief also presents further amendments to the presumptive tax regime to address ongoing challenges of low compliance and complexity. The analysis is based on simulations using UGAMOD, the tax-benefit microsimulation model for Uganda, and interviews with staff at the Uganda Revenue Authority (URA).

The 2020 reform contains four turnover bands. Companies are liable when their turnover is between 10 and 150 million Uganda shillings (UGX) per year. Annual tax liability also depends on whether the firm keeps records or not.

UGAMOD simulations suggest that, assuming full compliance, tax revenues decrease by between 48% (assuming taxpayers do not keep records) and 72% (assuming they do), when compared to a scenario with 2019 rules still in place in 2020.

The current regime leaves several challenges on the table 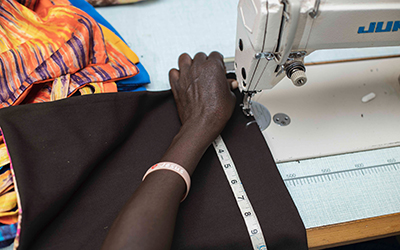 Importantly, the above estimates of the impact of the 2020 reform are hypothetical. While the reform was to be implemented and effective from 1st July 2020, the relevant changes in the public e-tax system were only implemented a year later. During 2020/21, presumptive taxpayers therefore paid their taxes according to the old regime.

Interviews with URA staff revealed that, regardless of how the tax scheme looks on paper, compliance has been difficult to enforce due to limited resources for audits and lockdown measures in the early stages of the COVID-19 pandemic.

URA staff recommended adjustments to the tax rates to augment revenue generation potential and to further simplify the system. In particular, the distinction between keeping records or not was deemed highly impractical as there is a lack of clarity for payers as to how ‘record keeping’ is defined.

These challenges informed a range of alternative reform proposals, which were devised to satisfy four guiding principles:

1) Simple and transparent tax rules. Self-reporting on whether records are kept or not should be eliminated.
2) Sufficient progressivity. Effective tax rates and absolute liability should increase with turnover.
3) Long-run revenue potential. The system should not lead to a substantial reduction in tax revenue.
4) Alignment with the rest of tax system.

The resulting alternative reforms, presented in Table 1, seek to foster taxpayer morale and the participation of small companies in the tax system.

According to the analysis, each alternative reform would have led to lower potential revenue losses in 2020 than the actual reform, assuming full compliance.

Table 1 compares the presumptive tax revenues from the alternative scenarios to the 2020 rules (where is it assumed that firms keep records), taking into account current levels of compliance. In column (A), only a subset of potential taxpayers is selected who would generate the level of actual revenue received in 2020/21. Revenues in column (C) are based on a full set of anonymized administrative records on presumptive taxpayers in 2020/21.

As the flat tax systems are more straightforward than the 2020 regime (and reform #1), they might raise long-run compliance. The first reform is however more progressive than the flat rate proposals as those with higher turnovers pay tax at higher marginal and effective tax rates.

Finally, the 2020 rules would have yielded lower revenue than was actually received by URA in 2020/21 (column C). This is because the URA’s digitized portals were not updated to reflect the new 2020 rules until the end of that tax year.

The flat tax proposals, in particular, satisfy the guiding principles outlined above. In addition to their simplicity and progressivity, the selected rates are likely to generate more revenue than the current regime based on all microsimulation estimates. They may also encourage new companies to enter the tax system over time, increasing long-run revenue generation potential from presumptive tax.

Second, the presumptive tax scheme does not operate in isolation. A firm may consider paying corporate tax if effective tax rates are lower under that scheme. Also, presumptive tax sits alongside various other payments to government that firms may have to pay that add additional (financial) burden. A low flat rate (such as 1% in reform #2) would be favourable when considering the overall alignment of presumptive tax with other taxes and payments.

Rules should be simple, transparent and sufficiently aligned with other taxes and payments to the government

A low flat tax rate would satisfy the calls for further simplification, is estimated to generate more short-term revenue than the current regime, and has potential to attract more presumptive tax payers over time

Finally, compliance will not be enhanced by the modelled reform changes alone. Appropriate tax education, and retaining the ongoing compliance and registration initiatives undertaken in Uganda, are critical to realize the full potential of any future reform to presumptive tax. Working Paper | An assessment of presumptive tax in Uganda