Are non-farm jobs the driver or a brake?

The increasing proportion of non-agricultural work in rural India has commonly been associated with widening income inequality. However, our simulations from the village of Palanpur in the north suggest that without this diversification inequality might well have increased even more.

From the mid-1970s onwards, a cumulative process of diversification to non-farm activities has taken place in rural India

Economic growth in India has been a double-edged sword — higher incomes have led to significant declines in poverty, while structural changes in the economy have been accompanied by increased economic inequality. Recent years have seen growing interest in understanding the drivers of rising income inequality in India. However, due to severe data limitations, most of the discussion is focused on the national level.

Rural India is home to 70% of the nation’s population. The rural population resides mainly in villages — the 2011 census reports roughly 800 million people living in more than 600,000 villages. Although most of rural India’s workforce remains primarily involved in agriculture, a cumulative process of diversification through increasing importance of non-farm activities has been taking place in recent decades. 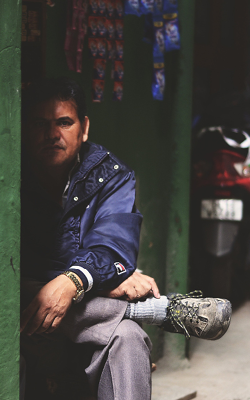 Our study observes this phenomenon and its implications in Palanpur over a period of six decades from 1957–58 to 2015. While conventional, nationally representative surveys are not able to monitor inequality trends at the village level, our surveys measure household incomes for the entire village on five separate occasions spanned by the survey period. We employ a measure of income that is both highly detailed and has benefited from extensive cross-checking and validation.

The case of Palanpur

An early period of agricultural intensification associated with the Green Revolution saw an expansion of irrigation and the introduction of new agricultural technologies. This led to rising incomes accompanied by falling poverty and fairly stable, or even declining, income inequality.

Subsequently, from about the mid-1970s onwards, a cumulative process of diversification to non-farm activities took hold, as can be seen from Figure 1. Non-farm activities represented roughly two-thirds of total primary employment in Palanpur by 2015, and accounted for nearly 60% of average household income in 2008–09. This compares to less than 10% of employment and 20% of income in 1957–58. 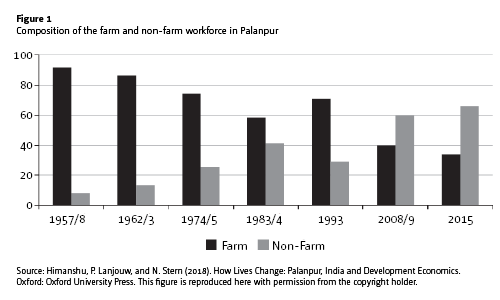 The casual non-farm sector registered the highest growth in employment in recent decades, notably in activities related to the construction sector. Although households rarely exit fully from cultivation, the extent of participation in it is determined by opportunities in the non-farm sector. Those with well-paid regular jobs reduce their involvement in cultivation significantly while those with casual sector jobs remain more dependent on cultivation in order to maintain levels of income and to manage variability. 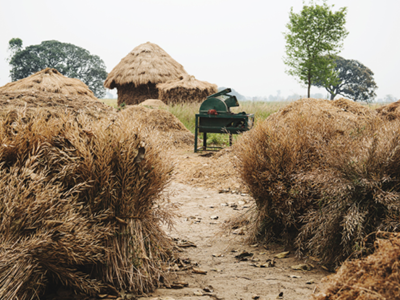 Diversification dampens the rise of inequality

During the period of diversification Palanpur experienced further growth and poverty decline, but also a significant rise in income inequality. The rising inequality accompanied the trend of moving to non-farm activities.

An important implication of this counterfactual analysis is that it points to the possibility that inequality increases in rural India might be expected to be larger in those villages that have failed to see significant non-farm diversification over time. The common perception in the literature is that non-farm income diversification is likely to be a force for rising inequality in rural areas.

Diversification to non-farm activities may act as an important driver of poverty reduction, and serve as a brake on further widening of inequality, but only if the poorer segments of the population also gain access to non-farm occupations