Policy Brief
Distributional effects of the COVID-19 pandemic in Uganda

In 2020, the first wave of the COVID-19 pandemic caused an economic crisis that disrupted the Ugandan labour market. How large were the associated income losses across different industries and population groups? To what extent did the general tax-benefit system mitigate the adverse effects of the crisis? UGAMOD, the tax-benefit microsimulation model for Uganda, helps to answer these questions.

In 2020, Uganda’s GDP growth rate was its lowest since 2000, owing to weak growth in services

With the exception of food relief and tax deferrals, the government did not implement new tax-benefit measures to support vulnerable populations during the crisis

The COVID-19 outbreak in Uganda provoked stringent (although short-lived) lockdown measures to limit the spread of the virus. The government suspended public gatherings in March 2020 and declared a nationwide lockdown soon after in early April. The measures were relatively effective in containing the spread of the virus but, combined with the sudden fall in exports and tourism, also hampered people’s labour market prospects. As a result, many households experienced sizable income losses.

The government enacted a stimulus package involving an array of tax deferrals and food relief to vulnerable households, but it did not implement extensive social protection measures to confront the socioeconomic crisis. While the damage to the economy faded in the second half of 2020 – owing especially to the easing of lockdown measures and travel restrictions – many households still suffered substantial economic losses.

This policy brief aims to quantify these effects. The UGAMOD tax-benefit microsimulation model is used to estimate the impact of the pandemic on incomes, poverty and inequality and the role of the Ugandan tax-benefit system in mitigating the adverse effects of the crisis. The analysis focuses on 2020 and thus on the first nine months of the pandemic. 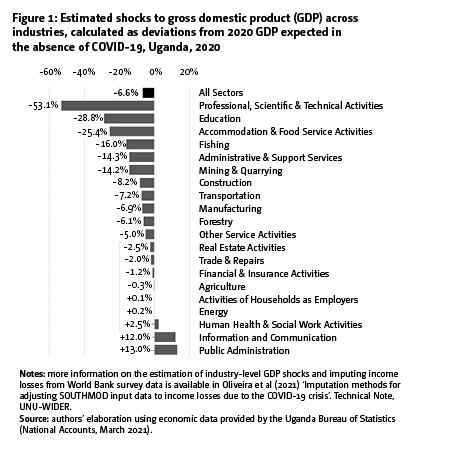 The analysis shows that service sectors were hardest hit by the crisis. This includes professional, scientific and technical services; education; accommodation and food services; and administrative and support services.

The two largest industries in the country – agriculture and trade, which employ 56% of the workforce – suffered less.

Interestingly, these less affected sectors comprise of a large share of poorer (often informal) workers, whereas many of the hard-hit service sectors discussed above employ more well-off (and more often formal) workers. As a result, both low-income and high-income households were affected by the shock, thus limiting the growth in economic inequality.

These sectoral shocks are derived by calculating each industry’s deviation from its pre-pandemic growth trend between 2017–19; they are estimated changes in economic activity compared to a hypothetical situation in the absence of COVID-19 in 2020. Figure 1 illustrates the shocks per sector and for the whole economy.

These macroeconomic shocks are distributed to the individual level by adjusting incomes and consumption expenditures in the re-weighted survey data for 2020, which are used in the UGAMOD model.

Overall increase in poverty and small decrease in inequality

UGAMOD simulations point to a slight increase in poverty and a small reduction in inequality (see Table 1). In 2020, the poverty rate increased from 21.6% (column A) to 22.5% (column B) as a result of the crisis. The Gini coefficient, the standard measure of economic inequality, was hardly affected, shrinking by 0.3 percentage points (column C). 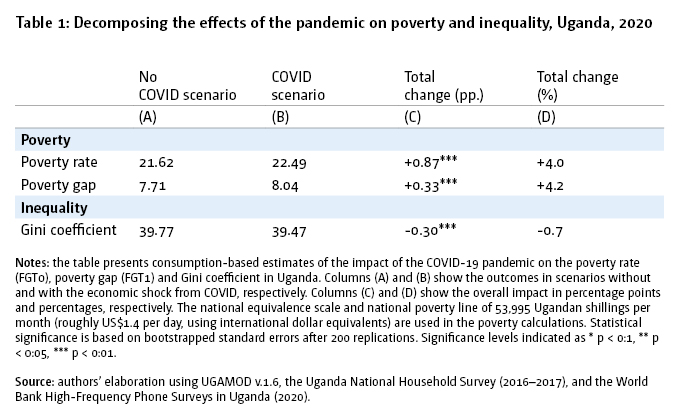 While the large shocks to higher-wage service sectors slightly reduced inequality, poorer workers were also negatively affected by the crisis. Note that the poverty effects in Table 1 are based on the very low national poverty line equivalent to roughly US$1.4 per day; few people fell below this low threshold during the crisis, in part because hardest-hit households were generally not the absolute poorest.

The general tax-and-benefit system, as it was in force when the crisis struck, was relatively ineffective in cushioning income losses and growth in poverty.

Further analysis shows mean incomes dropped by 5.5% as a result of the crisis. Without automatic protection from the tax-benefit system, they would have decreased slightly more,
by 6.5%.

These automatic stabilizers — most notably, lower tax payments resulting from earnings losses — however only benefited households in the top quartile of the income distribution. Combined with the lack of discretionary benefits to protect poorer individuals, this allowed the poverty rate to increase.

The Ugandan tax-benefit system was ineffective in stabilizing incomes due to two main reasons: (1) Uganda has a small formal sector, and only formal workers benefit from lower tax and social insurance payments when their earnings fall. (2) Social protection policies in Uganda are in general very limited and currently focus only on the elderly.

In the future, Uganda could improve its resilience against similar shocks by expanding its social safety net and strengthening the elements of the tax-benefit system that automatically increase spending on social protection or reduce tax bills in an economic downturn.

The government needs an explicit framework for identifying disadvantaged individuals in need of social assistance, along with new social protection measures and public infrastructure (such as a dedicated agency) to support them

Expanding the formal sector of the economy is also important for ensuring income stabilization through the income tax and social insurance system. This would require measures to encourage informal firms to register with the government and informal workers to reallocate to formal firms

Increased formalization of workers and businesses is an important prerequisite for allowing the tax-benefit system to provide more automatic income stabilization during crises Furthermore, individuals in need of public benefits are generally not well identified by the government, highlighting the need for a framework to define vulnerable populations and new infrastructure to support them. It is an index that measures the extent of inequality and is often used for the analysis of income inequality prevailing in a country. It takes the value of 0 in the case of perfect equality (everybody has the same income), and 1 (or 100) in the case of perfect inequality (all national income accrues to a single person). Estimates of the Gini coefficient for income nationwide range between around 0.25 (such as in some of the Nordic countries) to around 0.60 (in parts of Eastern and Southern Africa and, formerly, in Brazil). The Gini coefficient can also be expressed as a percentage ranging between 0 and 100.