UNU-WIDER Director Finn Tarp opened Finland's only university-level Model UN conference on 5 April 2017 in Helsinki. He spoke to delegates about UNU-WIDER's ongoing work on transformation, inclusion, and sustainability, the Sustainable Development Goals (SDGs) and the importance of engaging in global issues. 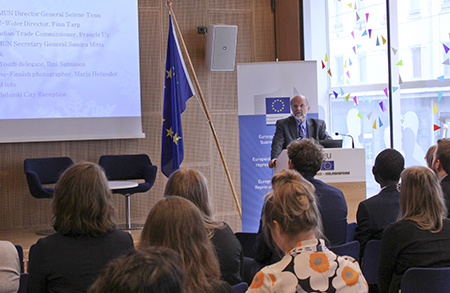 During his talk, he underlined the importance of evidence and facts to facilitate the actions of policy makers. This principle underpins UNU-WIDER’s research and policy analysis as well as its capacity-building and training efforts on projects such as SOUTHMOD, which aims to provide developing countries with the tools and skills they need to forecast the effects of changes in tax and spending policies.

Finn Tarp also discussed the role of data in tracking progress towards the SDGs. The data collected and analysed as part of the Institute’s work contributes to efforts towards achieving these global goals. For example, one component of the project on regional growth and development in southern Africa has looked at the potential impacts of climate change in South Africa. According to the research results, mitigation efforts are vital, as are adaptation measures, to minimize impacts on the economy and infrastructure.

The opening ceremony kicked off four days of discussion and debate on pressing global issues, with the environment and the Arctic being key areas of focus. Fifty-five students, both local and international, attended the event held at the European Parliament's Information Office for Finland.